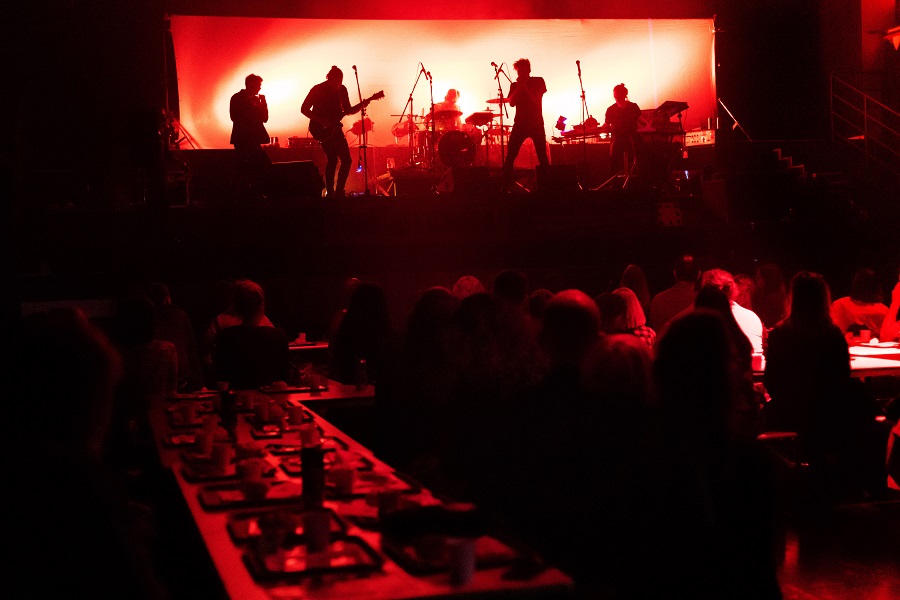 The music-performance event Mahlzeit was born from the desire to move away from the light, the desire to leave the stage to a greater extent to the collaborators of the Beton Ltd. collective, who were regularly in charge of the soundscape of the performances. Mahlzeit is based on the music of the Dead Tongues duo (Jure Vlahovič, Janez Weiss), but the scope of the performance is broader. The new ensemble was formed by Maksim Špelko (drums), Marko Brdnik (keyboards) and Janez Weiss (guitar), who designed and wrote new music together. The already existing songs, soundtracks of performances, were given a completely new and even richer musical form, and some completely new vocal and instrumental compositions were created. The Mahlzeit event also stemmed from the desire or need for a break, a recess, a snack. The need for an evening full of food, drink and good music. The need for temporary interruption of work, many years of continuity, and reflection. This resulted in an event, a treat for the audience in the form of food, drink and music, as well as an album offered to the audience in the form of vinyl records or digital record.

At the time of its creation and presentation, Mahlzeit was therefore an unimaginable connecting moment between the past and the future – the future we did not yet know was coming. A bridge between the recognizable tunes from Everything We’ve Lost While We’ve Gone on Living, Ich kann nicht anders, Groβe Erwartungen | Great Expectations, and the per formation Hoppla, wir leben. The Lost Gesture of Self Resignation.

Not only with its last song, the title of which later became the title of the per formation, but also with its gesture of authorial withdrawal of performers in favour of musicians, Mahlzeit marks the beginning of a turning point in the artistic creation of the Beton Ltd. collective. Nevertheless, the album contains characteristic features that are typical of all their works – a critical reception of social reality and expressing from one’s own positions.

“Mahlzeit is therefore essentially the sound of the current age, the changing identities, living narratives and orientations, where an individual cannot simply be grasped, but evades our grip time and again and appears in different ways, now in front of our faces, then again behind our backs …” –Muanis Sinanović, SIGIC

Program of the German Cycle

It is time to listen and marvel.

For students: 5 € – for all performances of the German cycle, with prior reservation at info@bunker.si.