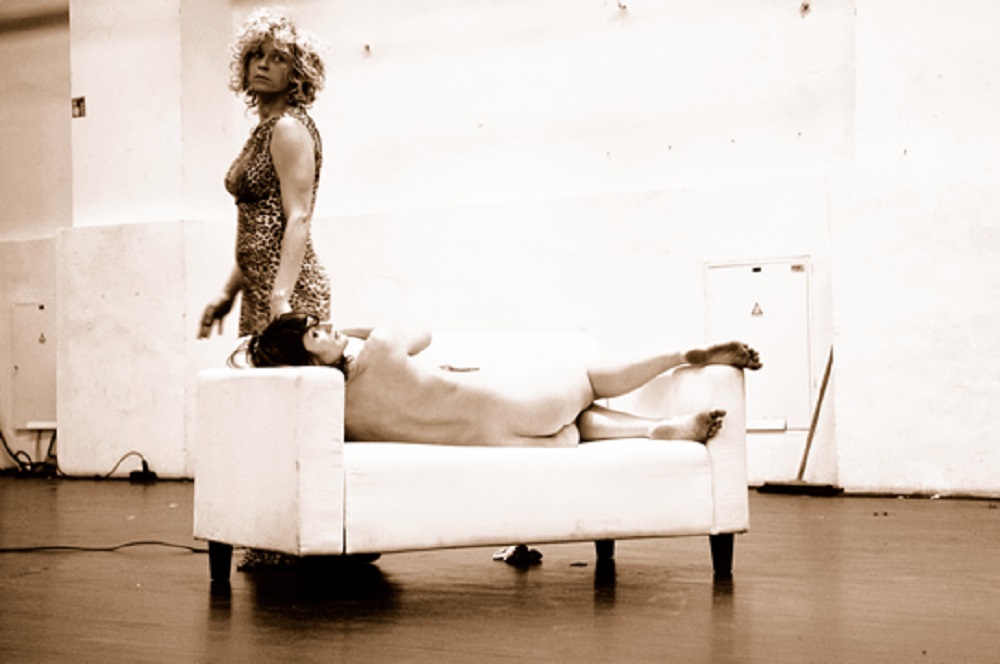 Teja Reba, Leja Jurišić: Between Us

A Nude Model on the Sofa Times Two

During the last decade dancers and choreographers Leja Jurišić and Teja Reba have set up as well as collaborated in several prominent dance productions/performances home and abroad, each of them separately enthralling the audience with a very specific quality of presence, energy and force of movement.

According to the authors, the performance Between us addresses a pretentious, existential and eternal theme, perhaps best paraphrased in the following question: “Why is living a life such a difficult thing to do, whereas the entire world with its plenitude of opportunities awaits for you and, at times, also for me?”

Just like any couple in a relationship, this duet also examines – be it silently or out loud – whether anything at all exists “between us”. What is it that defines a relationship between two individuals? What is that special something between two people, making it legitimate to claim that something really is between them?

The artists respond to this question with clean stage scenes, while using humour and distance to offer their answer, which at the end turns out to be nothing but a new question: a question about the division between intimate and the public sphere, about inside and outside, about the stage and the audience.

And finally, this is also a performance where Duchamp, Abramović and Cankar get to be together on stage in the rhythms of cha-cha-cha, thus sharing everything between them also with and amongst us. And so finally the audience comes to realize that these two performers can be just about anything they choose. They can represent all the femmes fatales and all the revolutionary women of this world. They can be superwomen, defeating all the negative characters with some kind of effective weapon. They can be anything in the world, as long as they remain together and on stage.

Duration: 70 minutes
The performance is in Slovene with English subtitles.