Today would be Nevenka’s birthday.

Next week, it will be 4 months since Nevenka Koprivšek left.
They say time heals all wounds – but for Nena, there were no wounds – even though she left way too soon, she left behind only beautiful things. And rather than with wound healing, one could draw a parallel with clearing the eyes. Looking from a distance, when we narrow our eyes of remembering, when the veil of months covers our sight, things are not blurred, but rather sharpened. We see all the important things, but most of all – movement!

Nena was constantly in motion – physical or mental, and therefore, remembering her is a dynamic process that cannot be captured only on a monument or cover in a text. The time after her death shows that Nevenka left her mark all over the world and in a wide variety of environments. Today, a piece of all these constellations of her are gathered here – in person and online – and today’s event coincides with Nevenka’s birthday. Today, she would be 62, we chose this day to celebrate her life, and connect, shed a light on at least part of all the memories … Although this is an impossible task. But those were here favourite ones. Nena was in constant motion, so her memory should be manifold and dynamic. A few examples of how we remember her and will keep remembering her:
– Cultural Association prostoRož and Tabor Cultural District filed a petition with the City of Ljubljana to name one of the city’s streets after her;
– the upcoming Mladi levi Festival, which will take place from 20 to 29 August, will be dedicated to Nena;
– as soon as she died, we asked people to plant a tree in her memory – Nena’s trees are already growing from New York to Georgia, from cornel to linden; we are collecting photos and locations in Bunker and will create a map of her trees;
– At the end of August, during the Mladi levi Festival, we will turn the first sod on the green next to this playground, which will mark the beginning of Nevenka’s Grove, a community area, something between a park and a socializing area. The grove will be permanent and will be named after her – it is being developed in cooperation with KUD Obrat with Urška Jurman and Polonca Lovšin, Maja Simoneti of IPoP, and Bunker;
– Nevenka’s office remains hers, but will be available to resident artists, internship students and visiting artists in Bunker’s programs; it will also become the campaign office tor the referendum on drinking water;
– and the book of condolences is still open on Bunker’s website.

You are welcome to follow the live stream of the celebration of Nevenka’s life! We will make today’s events relaxed, and the program will take place:
at 5, at 6 and 7 p.m., we begin with a musical intervention, followed by the recordings of various Nena’s friends, family, companions and colleagues – some have sent videos, others have asked for a microphone, and some of you can grab the microphone as we go. Throughout the evening, the screen will be displaying a series of photos donated by family and many friends – snapshots of Nena’s life.
We are in the company of DJ Božo and the entire Bunker team, which organizes the event in cooperation with Nevenka’s friends. There will be a concert by Silence at 8 p.m., and after the first song we will conclude the live stream.

Thank you to all who donated their memories and photos.
Bunker’s team 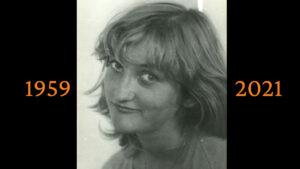