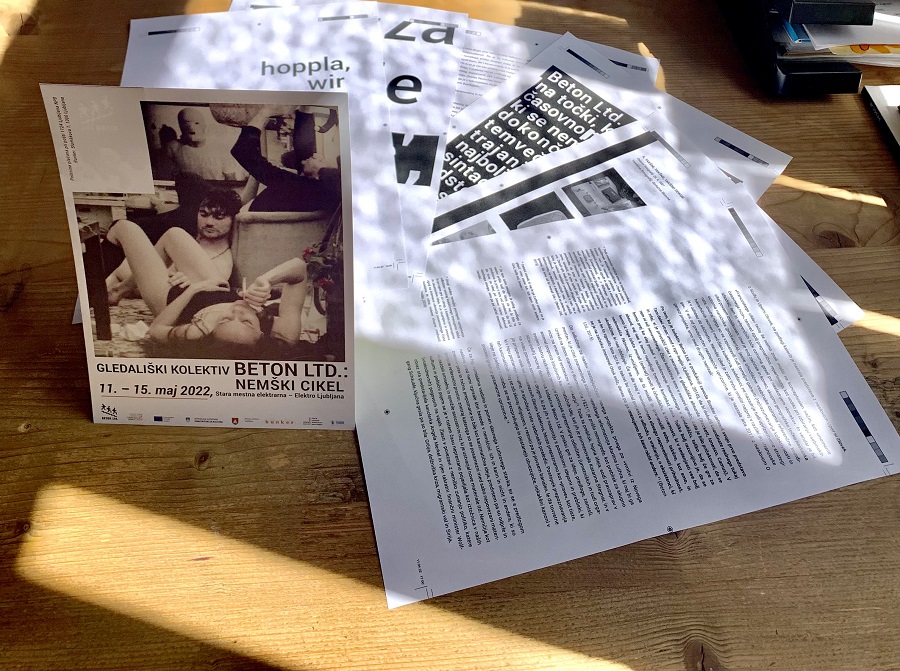 The book Hoppla, wir leben. The Lost Gesture of Self Resignation is the third in a series of books/printed editions accompanying the German Cycle performances by the Beton Ltd. collective. The first one, formally designed in the form of a photo book, accompanied Ich kann nicht anders and used photos to provide a parallel story to individual acts of the play – Apocalypse, Oasis and Mission. The second book, made using the butt print technique, accompanied Groβe Erwartungen | Great Expectations with a series of limited numbered unique prints of the creators’ buttocks. The third one, as a catalogue of the per formation, a catalogue of reflection and self-articulation – of the collective, the cycle, the per formation – accompanies the performation Hoppla, wir leben. The Lost Gesture of Self Resignation. All three books are based on a single design, which, combined into a whole, forms the colour scale of the German flag. Black, red, yellow. Also, one should not forget the musical imprint of the Mahlzeit – the limited series of the LP records.

Thus, the book Hoppla, wir leben. The Lost Gesture of Self Resignation in its yellow version collects the texts from the guided tours of the per formation, which were carried out by the members of the Beton Ltd. collective and their close associates on 25 and 26 September 2021.
The articles created on the basis of guided tours of the per formation are complemented by texts by Andreja Kopač and Tjaša Pureber, who try to reflect on the artistic work of the Beton Ltd. collective and on their gesture of resignation in a broader philosophical and geopolitical context.

In his contribution, Branko Jordan tackles the history making of the practices and performances of the Beton Ltd. collective, offering readers an insight into the work of the collective and the creation of ideas and procedures, as well as a historical overview from the earliest performances of the Beton Ltd. collective and the external contexts that drove the collective to explore and perform.
The contribution of 0045 / Miha Horvat, a frequent collaborator of the collective in the fields of set and lighting design, consists of a combination of diary entries and self-interviews created in different time intervals of the first opening of the per formation, in which he tries to identify his position in relation to Beton Ltd. Who is part of this collective, anyway, how broad can this concept be, and how to enter it?
Toni Soprano Meneglejte, also a regular collaborator in the fields of set design, lighting design, video, printed materials and costume design, did not decide to lead the guided tour of the per formation, but she is represented in the book with a statement.
In her text, Katarina Stegnar discusses different forms of collectives and collectivities, or different attempts at them. She presents her first-person experience of working in the Collect-if project, the Via Negativa group, the Betontanc group under the direction of Matjaž Pograjc, and of collaborations with the Jonghollandia collective, the Beton Ltd. collective, the creative alliance Brodar-Novak-Stegnar, and the experimental coexistence project Nova Pošta.
In the end, she touches upon the FORSALE project, which offered for sale the very collectivity of the Beton Ltd. collective as part of the auction of the performance Ich kann nicht anders.
Primož Bezjak’s text is an insight into the last guided tour of the per formation in its first opening. It is both an introduction to its last hour and a starting point for an intimate consultation with the author.