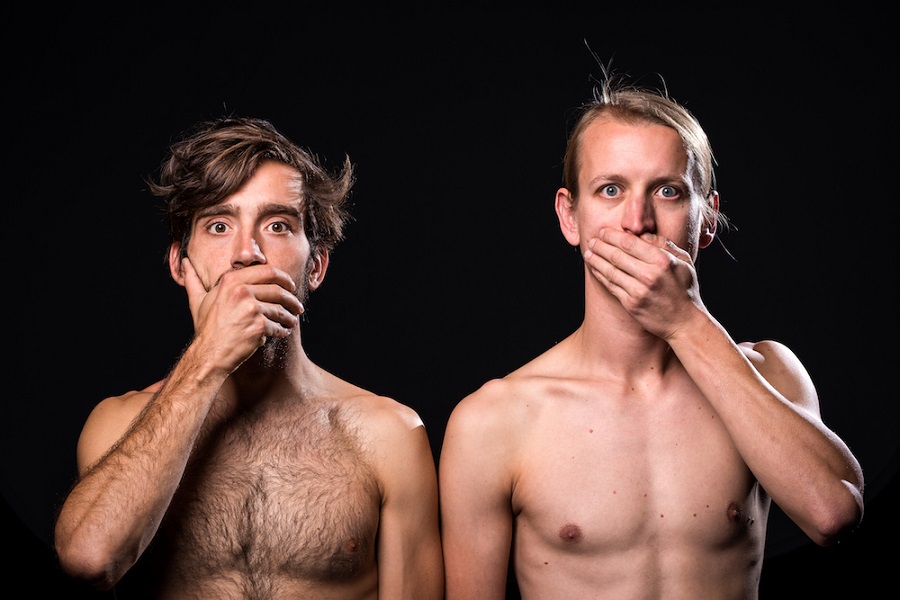 Who and what become the Heroes, when they drive themselves beyond words?
We know that they are white, hetero-sexual, cis-gender, middle-class, family men. One is married and the other one has a real estate. The audience is absolutely convinced that they are best friends also privately, not only on stage, but Vito and Uroš don’t barbecue together, they don’t go on holidays with their families together, they don’t share a boat, they don’t play basketball together, they don’t listen to the same music, O.K., once a year a family picnic or lunch … and that’s it. And still there’s something there between them, they don’t dare to acknowledge. At least not aloud. That’s why they decided to end the dictate of words. They simply can’t have it anymore. Words became unnecessary and intrusive. Only on stage and in front of witnesses are they willing to cut into the unspeakable. With the excuse that the stage can bare anything, because nothing is true and all is fake. Though the question remains, how much of this can the audience still take and not lose fantasies of an ideal partnership, because if the audience knew how much Vito and Uroš love each other they would never watch any other show with the same eyes.
Uros Kaurin and Vito Weis are among the main representatives of the young generation of authors in the theater field. They are versatile actors, movers, performers, authors, and multi-award-winning stage artists who have participated in major institutional and non-institutional theatres, institutions and projects. Through their performances (both as authors and performers), they have roamed Slovenia and the world. Both are recipients of the Maribor Theatre Festival Young Actor Award. For Hero 2.0 – The Show of All Shows, they received the Maribor Theatre Festival Acting Award (2018) and the Critics’ Award at The Thealter Festival in Szeged (2019).

you can BUY TICKETS ONLINE!