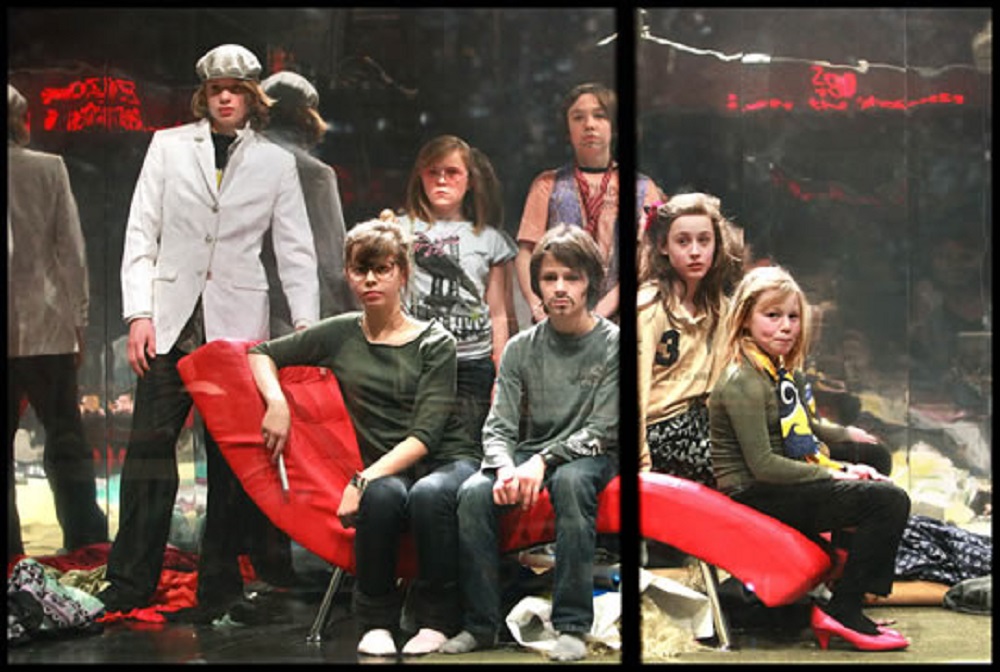 Eye to Eye with Oneself

Most probably you will not remember that moment from your childhood when you caught the sight of yourself in the mirror for the very first time. That bright reflection revealed the image of someone, who in the end turned out to be none other than you yourself – the creature you will have addressed as I from that moment on and for the rest of your life. If we were capable of entering that mirror, would we encounter ourselves on the other side? Rarely does a day go by without seeing oneself in the mirror, since it is there that one’s I resides and gradually also undergoes transformation as years go by in front of one’s very eyes.

And therefore: “Ladies and Gentlemen! Gob Squad proudly present a live show with real children. A rare and magnificent opportunity to witness seven lives lived in fast forward…
Before Your Very Eyes!”

For the first time in 17 years Gob Squad will not appear on stage themselves as they will be replaced by children. The audience will watch them in a safe room on the other side of the mirror as if they were insects in an empty glass jar. The children will stare in the audience, representing their future as grownups, who in turn nostalgically look behind for their own past.

Gob Squad is a group of British and German artists. Their performances and installations do not take place merely in theatres and galleries, but also in offices, shops, railway stations, and in hotel rooms. They use the language of film, television and pop music. They explore the complexities and absurdities of the present time. They are on the search for beauty, meaning and humane touch amongst the flashy facades and dark corners of contemporary culture.

Duration: 70 minutes
The performance is in Dutch and English with Slovene subtitles.