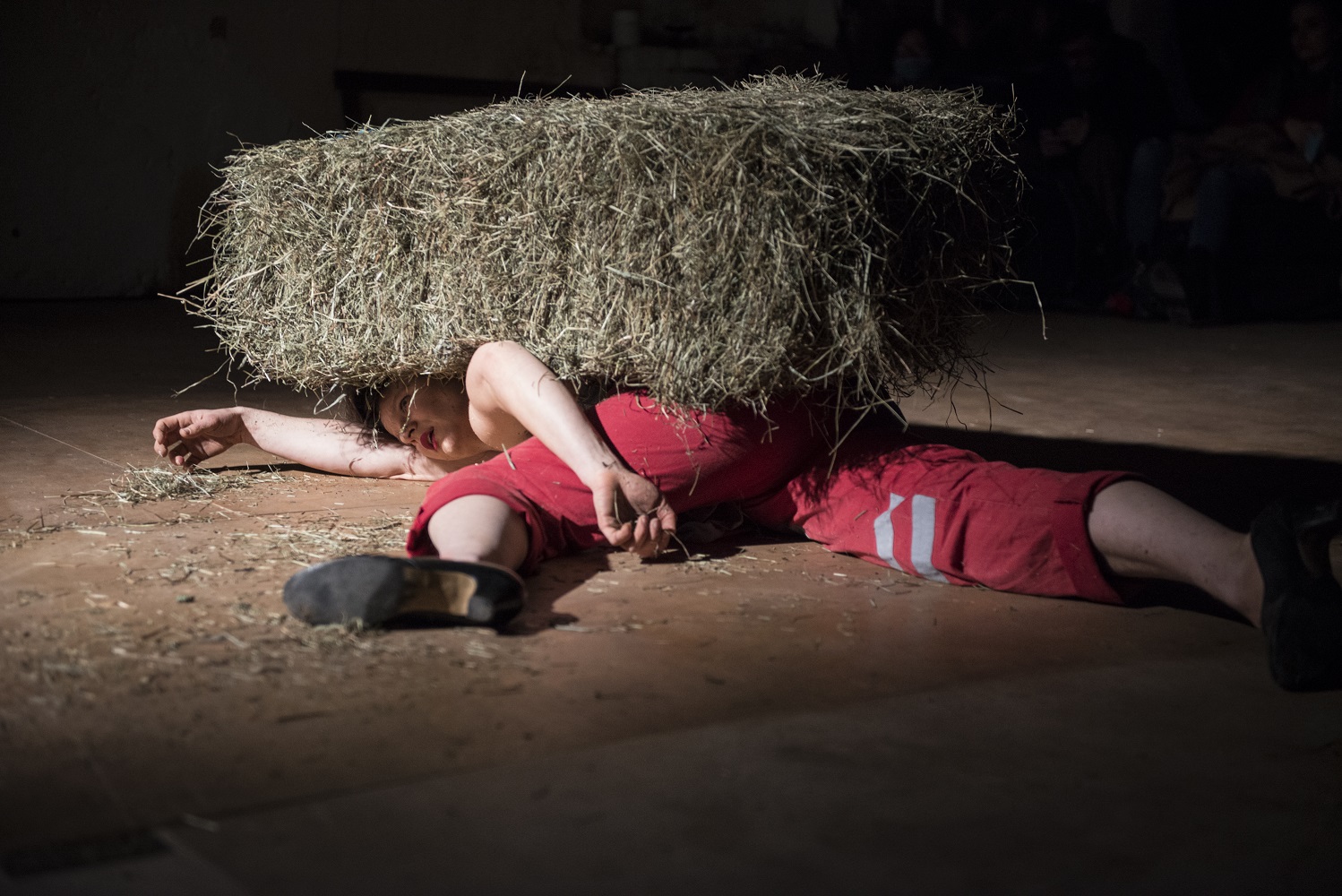 The performance Niti (Threads) plays with the intersection of the genres of performance, physical theater, (experimental) modern circus, aerial performance and improvisation. The work is personally expressive and illuminates life in a traditional, patriarchal peasant environment. The author draws inspiration for the play from the lives of her grandmothers, mothers and sisters, i.e. the female branch of the family, which is strong and important, but at the same time their work and contribution to the family and farm life are often invisible and systemically unrecognized. Life where the man of the farm is usually the “master” and the woman is the “housewife” and a “dependent family member”. The various roles that women take on are also associated with stereotypical personality traits: being caring, kind, gentle, feminine, etc. Reality, however, presents different, sometimes even diametrically opposed images. Niti can thus be a critique as well as an attempt to pay homage to the author’s roots, expressing understanding and acceptance.

The author subtly places her personal experience of living in a nuclear peasant family in the broader social context of patriarchal and capitalist social order. The performance calls into question a system based on patriarchy, traditional gender roles, nuclear family, etc. The piece also questions how farm life, intertwined with traditional values, has affected the author herself – she cannot identify with these values but they still have a strong influence on her. It thus deals with the constant change and transcendence of one’s own limits and capabilities and the fluidity of identity.

The author uses hay bales as a scenography and a prop with which she creates relationships. In the play, the symbol of patriarchy is deconstructed, excavated or buried. Instead the author, expressing herself through aerial acrobatics on ropes, unravels different possibilities.

Danijela Zajc (1985), with a master degree in pedagogy and sociology of culture, is a performer, pedagogue and producer. For years, she has been intensively acquiring knowledge about contemporary dance, performance and contemporary circus at workshops and gathered training at home and abroad, with various world-famous mentors. Since 2012, she has been more intensely involved in dance and aerial acrobatics on fabric and rope.
Danijela Zajc performs independently and with the groups Fourklour (Vitkar Institute), Feminalz (Emanat Institute), FEM TV (KUD Mreža), Moje prav(lj)ice (KUD Transformator) and Mismo Nismo (Mismo Nismo Association). Her short projects include: Demolition of Tango (Stair Show, 20 ‘), Square (performance on an air rope, music: Veronika Valdes, 12’), Dreams (performance on an air rope, 15 ‘), Janez Blond (MC; point of vertical dance , 6 ‘), Plastic Fantastic (performance on air rope, 17’; performance 10 ‘, performance 30’). In 2019, she made the first longer author’s project entitled “Threads” – a circus miniature, performed at the Klovnbuf festival, while in December she presented the full-length circus show “Threads” at Cirkusarna NaokROG, AT Rog. In the same year, she choreographed the group point of aerial acrobatics of the final production of MOTA in Salzburg.
With various collectives and individually, she has performed as an author and co-author at many festivals: Dobimo se pred ŠKUC, Festival Cirkobalkana, Festival Ana Mraz, Festival Ana Desetnica, Festival Rdeči Revirji, Festival Sindikat, Festival Reciklart, Festival Pisana Loka, Festival Maribor, Co-Festival, Red Dawns Festival, Padec Festival, Ana ZaRogovili Festival and Mladi Levi Festival, just to name a few.

The performance will be streamed on the 9th of March at 20:00 through the Red Dawns Facebook page.
Free entrance