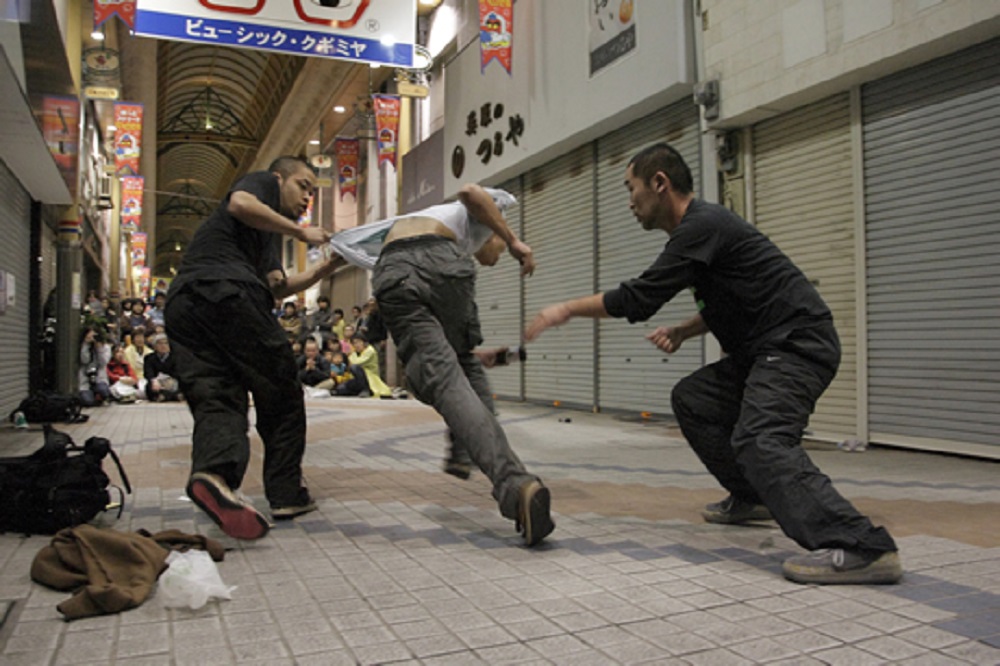 contact Gonzo: The late drummer / studies of happenings on stage and rhythm that doesn’t match but in a way it does

Friday, August 19th at 8 pm
the platform by the Slovene Etnographic Museum

The young Japan-based movement/physical performance group contact Gonzo became widely known for various guerrilla street performances. Some even compare them to the MTV series Jackass, but they are much more than that. The young group members say that their performances are not based on the movement technique. “We simply come to the park and start playing”, they note. “Our best exercise is everyday life itself.”

It is quite interesting to learn that they found one of the major sources of inspiration for their unique movement expression in a Russian martial art technique The System and not, as one might expect, in a range of notorious martial arts coming from the Land of the Rising Sun. They discovered The System on YouTube and also studied it by the help of the internet, virtually creating their very own version of “fighting”. In their opinion, the focus of Western martial arts revolves around winning or losing, whereas The System builds on somewhat more pacifist ideas such as dancing and contains the yet undiscovered movement phrases. It isn’t so much about defeating the opponent as much as it is about manipulating his weight.

The name Gonzo comes from the term Gonzo journalism, created by a journalist and an actor Hunter Stockton Thompson. It represents a style of reporting that demands of the reporter himself to get involved into the story he is currently covering in order to become its main hero. Sometimes the performances of contact Gonzo may seem like downright wrestling, and yet other times they come across as a manifestation of sophisticated dance. That crucial moment, announcing the beginning of it all, is when a seemingly innocent encounter of two boys escalates into an intensive fight. Contact Gonzo thus becomes the main hero of movement and a philosophy of pain at the same time.