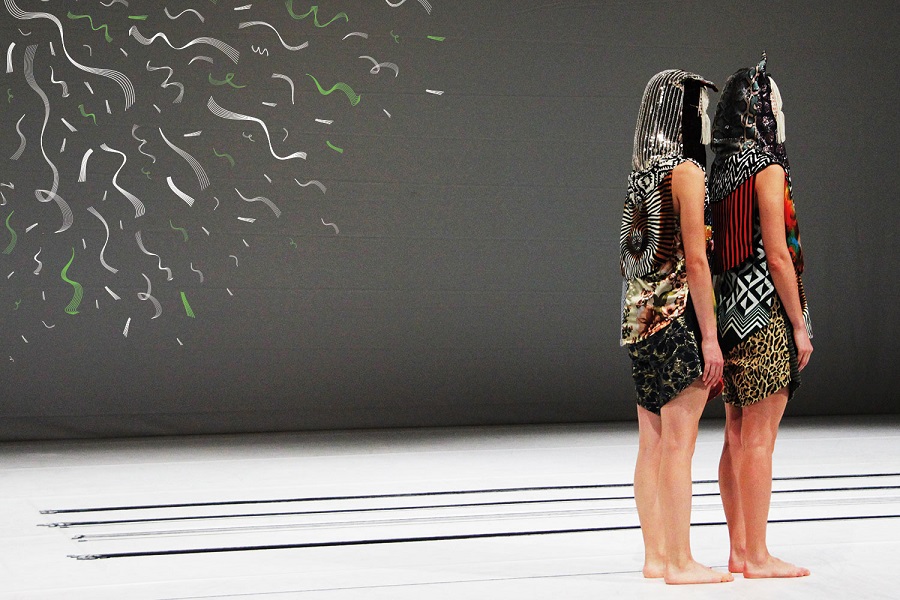 Alessandro Carboni: The Angular Distance of a Celestial Body

The Angular Distance of a Celestial Body is a reflection on the mapping process, which is seen as a reduced representation of the Earth’s surface and the events that occur on it. To reclaim the complexity of the world, Alessandro Carboni replaces the graphic signs used on maps with the body. On stage he places a geometric structure on the floor counterposed by two symmetrical bodies disguised in a montage of carnival inspired costumes. The actions of these figures lead, and are followed, by the soundscape, developing into an echo of the futile ambition to control the world.

Alessandro Carboni is an artist whose practice is situated within the performing arts field as a choreographer and performer. After several years of practice in the field of visual arts, creative media and performance art, he has developed an interdisciplinary practice focused on the production of performative and installation projects with the collaboration of professionals from different disciplines. Alessandro presents his works internationally at museums, art galleries, contemporary dance and theatre festivals, as well as in unconventional spaces. As a committed teacher, he has been lecturing on his findings at numerous distinguished academic and non-academic institutions. His projects are supported by Formati Sensibili, an independent production company which shapes projects of artistic research and practices.

Festival Pass is available for purchase at the Španski Borci Cultural Centre box office during opening hours and at www.mojekarte.si. With your Festival Pass you can pick up tickets for each individual show at the specific venue box office on the day of the performance.

Ticket for a single performance: 5 EUR

You can buy tickets for individual shows on the day of the performance at the specific venue box office during opening hours.