The FORSALE Performing Arts Auction House offers a sleek and enchanting entry into a complex and ambiguous world where reality and fiction intertwine in the fields of theater, law and economics.
FORSALE encourages audience members to become potential customers, experience ownership, and learn what it means to possess performativity. The FORSALE Performing Arts Auction House evaluates untapped resources in the global market. With its legal, economic and philosophical framework, FORSALE shows how to teach a lesson to neoliberalism, as it uses privatization to keep the common good alive.

It is the next step in the history of ownership and the future of the ephemeral economy.

The auction of the performance Ich kann nicht anders takes place only once, but the Performance Auction House will continue to operate, selling other performances and creating new value, which will benefit both artists and the first investors. In addition to the financial polygon, FORSALE opens up questions of ownership, authorship and, above all, the ephemerality and collectivity of theatre – how to sell the elusive, or will FORSALE be the product which will defeat the system?

So come and buy, because,
“If you want to change the world, you have to own it.
To own it, you have to buy it!” 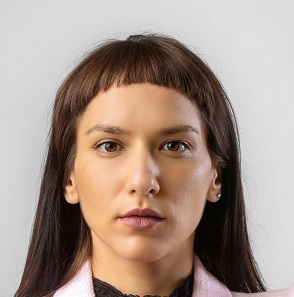 Lea Kukovičič (1994) holds a bachelor’s degree in dramaturgy from AGRFT and a master’s degree in directing from DAMU in Prague – auteur theater and object theater.

She is interested in the game of established social systems – how to establish enough rules to keep the game running while we play it and at the same time – how to break the rules of the.

She is a theater creator, but her work is often enriched and informed by political contemporary visual arts; in her creations she focuses on how art can directly influence society, the economy and politics. She creates temporary collectives of artists and non-artists who rethink and define theater.