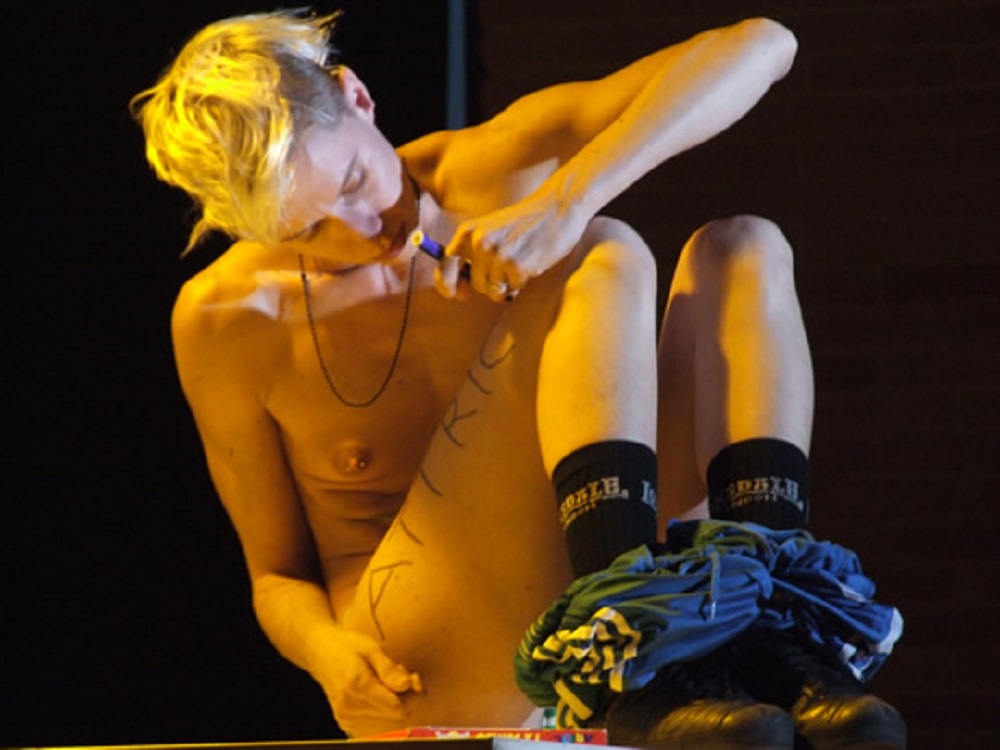 TOO LATE!_(antigone)contest #2 is devised by an outstanding acting duet, composed of Silvia Calderoni and Vladimir Aleksić. Judging from the force embedded in the performance, one could easily assert that it augurs the new wave of Italian theatre. Its main vehicle lies in Antigone, who served as a source of inspiration for two more Motus performances.

The stage furnished in a minimalist fashion unfolds a contemporary story about a rebellion of an individual against authority, physical and direct war of Antigone against Creon, war of one dog against another, war of a human being against the state, in short – a war of generations. According to the general opinion, the true tragedy of Antigone seems to lie in the fact that it is simply too late for anything. The essential question, posed by the group established in Rimini 1991 by Enrico Casagrande and Daniela Francesconi Nicolò, is whether it is also too late for this generation.

Motus doesn’t hide the fact that it is fed up with depleted theatre meanings and prosaic stage formalism; their belief is, rather, that the power embedded in theatre may also function as a trigger for action; that theatre, furthermore, has the potential to become the story of a revolution with poetic terrorism as its main weapon.

A story about the power of an individual and not that of the group. A story about the new generation of dictators (associative references to Berlusconi and many others are far from random), convincing the masses that greed is essentially a good thing and that poverty is, naturally, inevitable. A story about those few individuals who have the courage to stand up to such dictators. The exceptional performance of the main actors makes it seem as if Brecht and its famous alienation (Verfremdung) effect meet eye to eye on the 21st century stage.

Duration: 60 minutes
The performance is in Italian with Slovene subtitles.