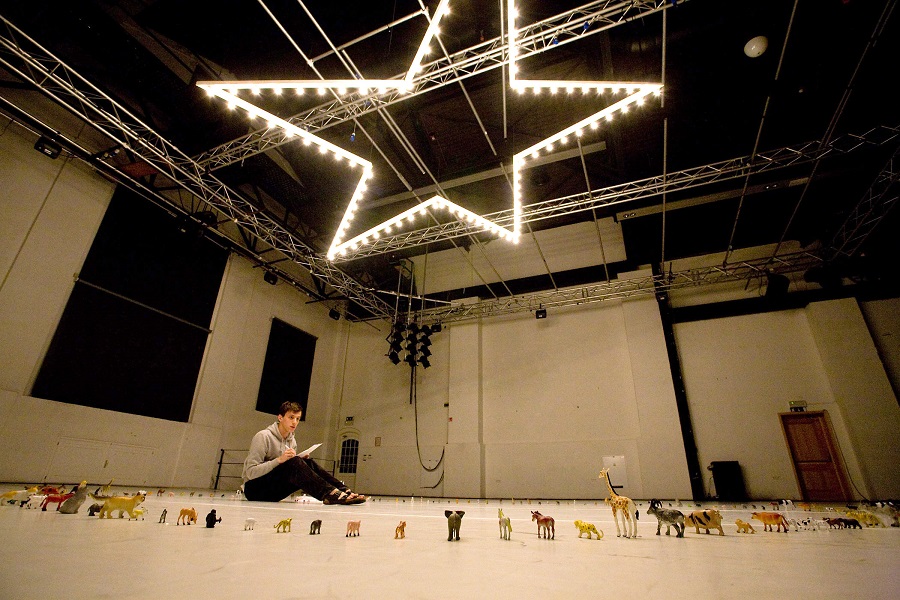 In his solo performance Sad Sam Almost 6 Matija Ferlin wants to investigate a mind of a child that is not conditioned by anything, not even by his own existence. While growing up, the conscience of the existence creates numerous “terrorizing” facts that are results of social conditions and constraints. All fictitious childhood characters become enemies. The fact that we have to grow up results in imperfections that make our lives and modes of existence specific and individual.

(…) Convincingly and in places wittily, Matija Ferlin creates a meaningful relationship with the props – the figurines, a relation which can be understood as child play but at the same time also as an ironization of positions within different spiritual groups, ultimately dance workshops, where the teachers and pedagogues conceal their shortcomings, without ever assuming the responsibility for the slippage of their concept. The precise structure and the persuasive suggestibility of the author provoke the impression that the figurines on stage come to life, while the theatre illusion that the fifty-minute long performance is considerably shorter than it actually is certainly indicates that the dance performance Sad Sam is thoughtfully structured.
Delo, February 6 2009, Sad sam/almost 6/, Mojca Kumerdej

(…) The performer’s actions had an effect of child’s play, persistently sliding into social metaphor. The uncounted figurines stood in for the real community (“All you have in common are these actions and this place”), which was controlled and guided by the performer and which was grounded in a common act, such as marching in a circle. This community was also stuck in an in-between space, since it was slit across by the actor’s tendencies for individuation, which is ultimately present in the development of every child. The child growing up in front of us on stage distanced himself from the community in a way that he demanded ample attention from it and pointed out his specificities (he interpreted his favourite song, for example). If one half of the podium suggested social structures, primarily its norms, conventions and especially emphasized strategy of reduction and upbringing, the other, entirely emptied half, lighted by an array of lights (the sun?), represented the field of memory, naked individuality, not yet struck by the society. It represented child’s ontology, expressed through the reminiscence of an adult, who had long time ago experienced a genuine sensual experience. (…)
Dnevnik, February 5 2009, V etično brez blišča, Ana Schnabl