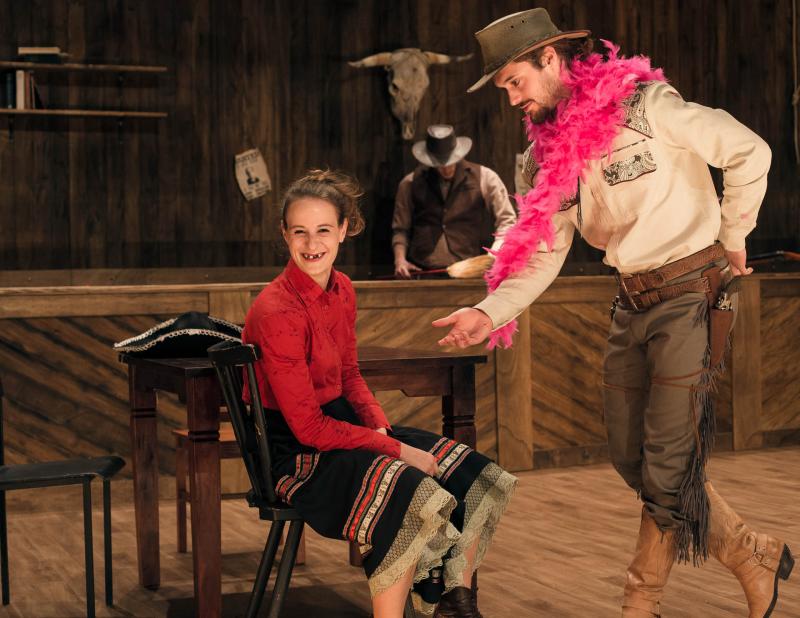 EnKnapGroup is currently the only Slovenian permanent contemporary dance ensemble. It is skillfully led by the artistic director Iztok Kovač, a world‑renowned dancer, choreographer and founder of the EN‑KNAP Institute, who is shaping a topnotch collective by constantly choosing new choreographers and directors, making EnKnapGroup an ensemble capable of tackling not only dancing, but also acting and directing challenges. For the performance Pursuit of Happiness, the collective collaborated with Nature Theater of Oklahoma, the New York artistic duo Kelly Copper and Pavol Liška. Their works represent an interweaving of theatrical boldness, and at the same time communicativeness, capable of operating on different levels – engaged, but at the same time with humor.

Pursuit of Happiness almost feels like a Spaghetti Western: iconography of the Wild West, intense situations, long stares, cowboy dance, Morricone‑style music, a sea of corpses, and an endless pursuit for a single goal that drives the performance. It is a worn‑out saying that art is a mirror to society; in Pursuit of Happiness, the authors looked deep into that mirror and stuck their tongue out at it. Of course, apparent in the performance are problems of society that is in constant pursuit of goods, success, progress, at the expense of others and itself. But the more entertaining aspect, full of taunting and depth, is the performance holding mirror up to the art itself. The imperative of the American Dream is definitely changing the world. Can we say the same for art?

After the Pursuit of Happiness you are welcome to join us for a discussion with performers. The discussion, moderated by a member of Moment, actor Uroš Kaurin will hopefully develop to a party. Food will be provided, the bar will be open. 20 minutes after the performance we will provide a bus ride to the GT22.

»We are thrilled to cooperate with drugajanje and especially happy to host the talk and the party after one of the best performances of the last season. We hope to see you and to seek happiness long into the night.« Uroš Kaurin