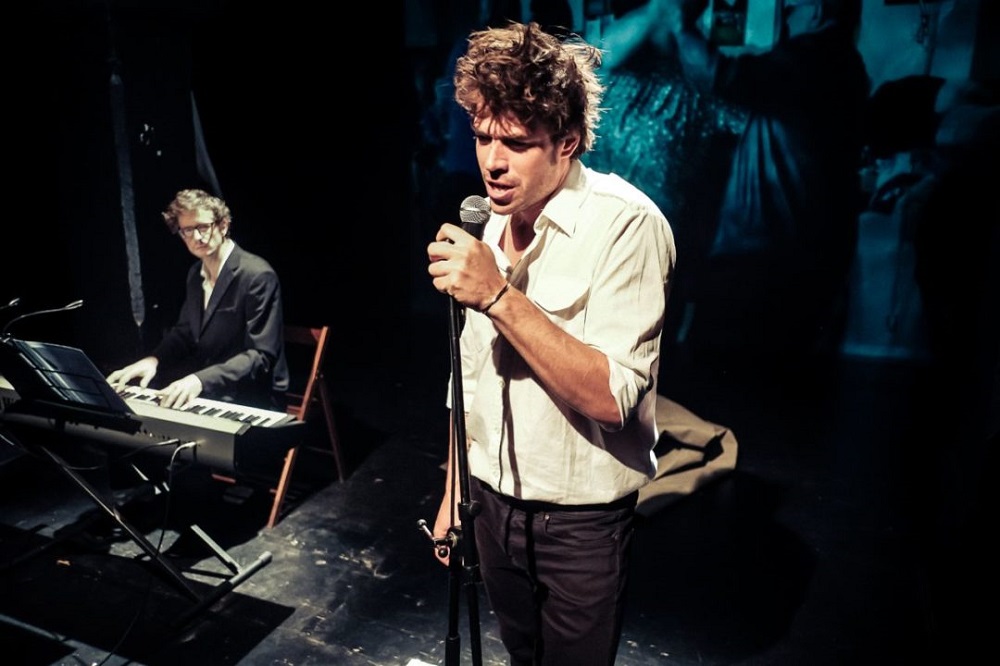 A few years ago, the primarily visual artist Mark Požlep set off to a seemingly strange tour: a musical tour of retirement homes throughout ex-Yugoslavia. At the homes, he sang golden oldies from the fifties and sixties to the retirees.

Mark has already presented this tour in a gallery setting, for which he received the OHO award in 2016.

Stranger than paradise is a documentary performance, something between a concert, a travelogue and a gathering of friends. The show touches upon the topics of ageing, common and individual fates, the rebuilding of demolished relationships and torn communities. It speaks of a generation that had spent all their lives in a common country, and of one that barely remembers it from their youth. It speaks about man and his great desire for change, his unbelievable capacity to build and destroy. About Mark and about all of us.

How do we cope with reality in which every effort to think outside the prevalent socio-political paradigm, offered as best of all possible worlds, is disqualified as mere childish reverie? Where is the boundary between the attempts to leave the confines of the everyday and illusory utopia? What is it that gives us power and motivation for action after the end of the great meta-narratives? In order to explore this boundary, I normally set on journey-travels, which acts both, as a long durational performance and as an art piece in itself. It is an intense processual exploration, to reveal the tension between politics and poetics, individual action and impotence. The journey is not an illustration or a metaphor; it is an experience; it is the crossing of real places.

Organised by: Emanat and Glej Theatre

Quotes
“With the very theme of the lyrics, the music repertoire of the event establishes the generation of retirement home residents as a generation accumulating memories and reliving the past. This is precisely what proves to be the largest common denominator of the residents of the once united state who are no longer bound by national identity. What connects the elderly across the republics of the former Yugoslavia is, therefore, precisely the collective cultural identity that is inscribed in them, and which is manifested through interactions with the song as the means of providing insight into a generation.”
– Jernej Potočan, Maribor Theatre Festival Blog

“As an aesthetic response to the shifts that seek to erase social solidarity and universal emancipation – as represented (at least in theory) by the Yugoslav project – from the experience of the past in order to limit its actuality, memory and recollection of the performance Stranger than paradise represent a refuge from the daily experience of vulnerability and loss of sociability. Social utopia has shifted into the past; projections of the future became its categories, accessible through memory.”
– Rok Bozovičar, Alja Lobnik, Radio Študent