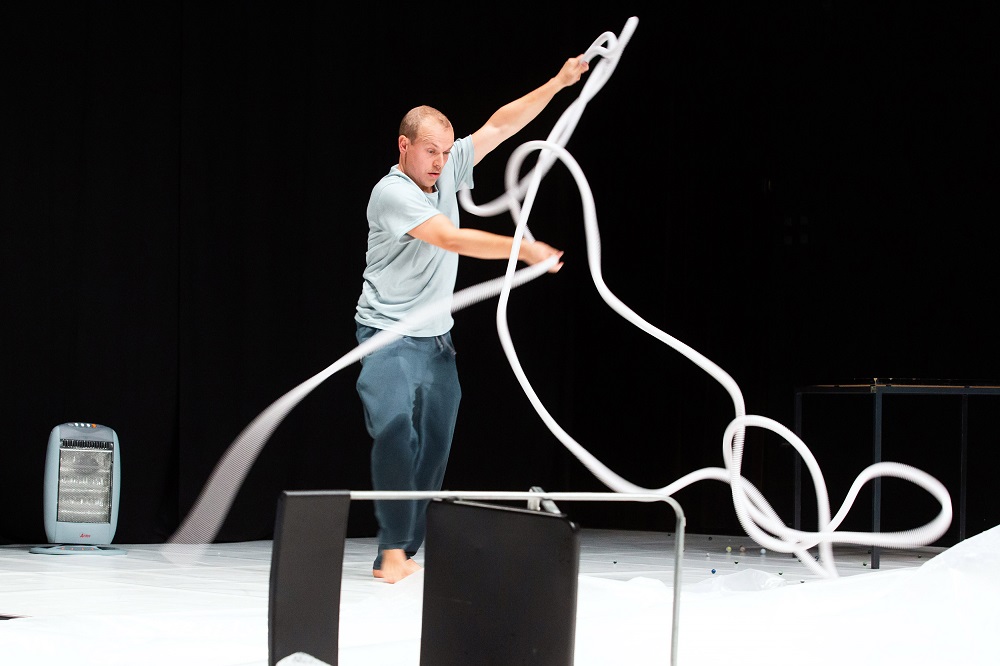 In his new work, choreographer, performer and improviser Jan Rozman confronts things – objects that surround him and the sensations and ideas triggered by them. Thinging is a visceral reaction to the world of things we are living in. It thinks and it sings.

The stage becomes a space of contact for the living and non-living matter; an environment where things can relate, communicate and coexist, perhaps revealing a different side.

The piece works with spaces of being in-between – between objects and subjects, between existence, speculative existence and non-existence, inaction and activity, saturation, calmness and emptiness, light, dusk and darkness, quotidian, mysterious and poetic, as well as between individual present bodies.

The creative process is rooted in a performative research on materiality, started during Jan’s study at Solo/Dance/Authorship master study program at the Inter-University Centre for Dance in Berlin. Conceptually, it leans on the ideas developed by philosophers of speculative realism and object-oriented ontology (OOO) and their understanding of things. Considered as a non-instrumental entity, things are enabled to expose their poetic potential and uncover their own choreographic force alongside and in relationship to the performer on stage. Thinging is challenging anthropocentric thinking by searching for alternative modes of cohabitation of things in a time of threatening global ecological catastrophe and oversaturation with objects in contemporary Western life.

On How to Let ‘It’ Be – Essay by Julia Keren Turbahn

You can read more about things and questions of materiality in Jan’s artistic practice from an ecological perspective in an essay Questions of Ecological Artistic Practices: The Living Things, written in March 2017 in the frame of MA SODA at HZT Berlin. There, he dedicated a semester to explore the notions of materiality in theory and practice; that process served as a foundation for the Thinging performance. The essay is available HERE,