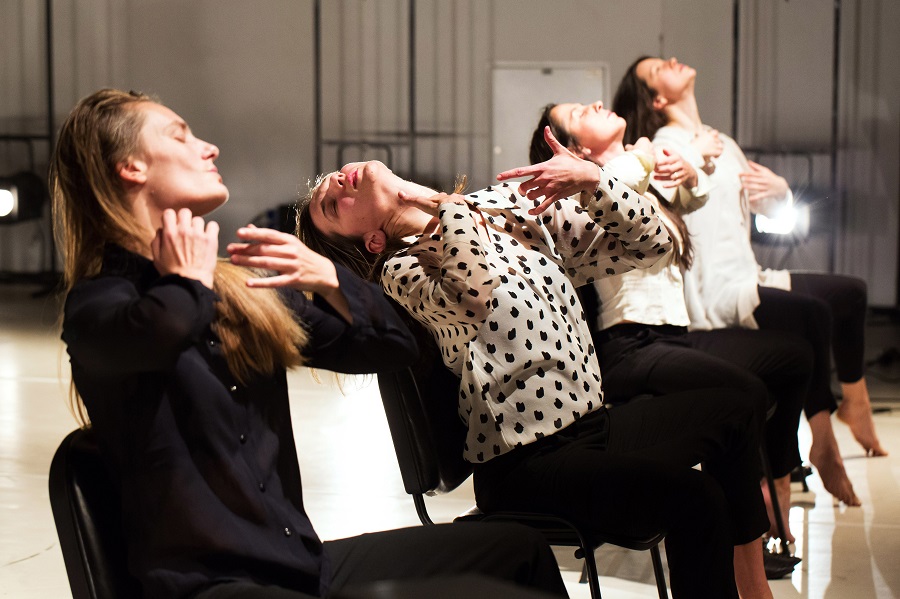 Due to injury, the performance is CANCELLED.

DEAR VISITORS! IN ACCORDANCE WITH THE NEW CONDITIONS FOR VISITING CULTURAL EVENTS, VRT CONDITIONS APPLY TO VISIT THE THEATER.

The performance Moved by Voice by Irena Tomažin Zagoričnik continues her exploration of the relation between the body, voice, and space. The author and her three collaborators undertake a research into the multiple sources of voice, its flesh, its materiality and metaphysical properties, and scrutinize its meaning and place in everyday life.

How to let the voice come out as resuscitation and giving ear to the manifold sound space in and outside of the individual and collective bodies? The body that listens and resonates with the heard. Every so often, the voice becomes tangible and enters the body directly – the closeness of this place is strangely uncanny because we are oblivious and alienated from our innermost flesh.

‘With a concept that positions voice as the point of origin, Irena Tomažin Zagoričnik opens up the history of silence, while at the same time, intentionally or not, she also shows a certain reluctance to accept that the silence ever existed at all. This brilliantly developed composition for four female voices and bodies, absorbed in spasmatic becoming, connecting, and later orchestrated acting and dissolving only to begin again, incessantly raises the question: where is their drive coming from? (…) In this performance, it is them who are moved by voice and they show this without holding back, frontally, getting nearer and nearer, and when they come to the point of stopping, they take another leap. That’s why it is so important to know that this is not the voice of one (of them), but the voice of the four of them, which becomes a single voice, resonating in and alongside one another, possibly also triggering the voice near-by. Because of its sophisticated concept and a subtle, but unrelenting execution, the performance Moved by Voice will be remembered as one of the art highlights of the year in this city.’ (‘The Voice Was There First’, by Nina Dragičević – Odzven, online music magazine, SIGIC, 2017)