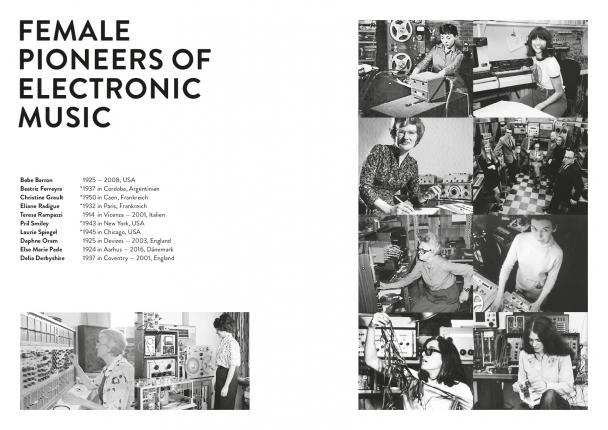 Given the visible proliferation of concerts, concert cycles and festivals setting female sound artists in the foreground, we are able to say in no uncertain terms that the strivings of feminist producers and sound artists have been fruitful. However, it seems that the orientation towards eventfulness sometimes triggers a lack of space for theoretical reflection and work beyond the public stage, which is vibrant, as well. At the conference Feminism in Sonic Arts, prepared within the framework of the European project Musica Femina International, lectures by female musicologists, sociologists of sound, composers and producers will make us focus precisely on this theoretical aspect of feminist work in sonic arts.

We shall tackle five fundamental areas of interest, relevant for the international as well as local space: researching and archiving lives and artwork of the composers, the potentials and challenges in feminist museology in the field of sonic arts, the importance of presence of sound artists on public stages, the politicality in composing and the new approaches to sonic historiography of female artists in the area of former Yugoslavia.

Mary Ellen Kitchens
On Music Archives: Research on women composers
The presentation will cover the major activities of the Archives of Women in Music (Archiv Frau und Musik, AFM in Frankfurt, Germany) and its operating association, the International Workgroup on Women in Music, in the 40th year of its existence. We will discuss the current projects such as “Increasing the Visibility of Women in Music”, the “Composer in Residence Scholarship”, the oral history project “Women activists in the music field create visibility”, the archive and digitalization. Some of the regular activities of the Archiv Frau und Musik will also be presented: general collection development (collection focus: musical compositions by women composers), the collection of press reviews and articles regarding women in music, networking meetings for women in music organizations throughout Germany, research services, creation of annotated repertoire lists of works by women composers, guided tours of the Archiv Frau und Musik, lectures on related topics, as well as concerts featuring works by women composers.

Irene Suchy
Feminist musicology, music by female composers and a room of their own: Challenges and advantages
After ten years of looking for a venue, the MusicaFemina – From Shadow to Light exhibition featuring creativity of women composers throughout history finally took place in 2018 in the historical gardens of the Imperial palace of Schönbrunn in Vienna. Visited by 56.000 people in two months, the exhibition offered the audience an introduction to the significant role that women have played in the making of music throughout the centuries. Along with presenting the main exhibition topics and reasons for it, the lecture will address questions such as the process of researching music made by women composers; the advantages and challenges of selecting composers for a group exhibition, taking in consideration issues such as highlighting their visibility or enhancing omissions; obstacles finding resources for large scale projects; and how can female composing find a common aim with other forms of creativity, such as poetry, film, performance and sculpture. The lecture therefore aims to open floor for commonly discussing the tools and strategies that not only support women in composing but also affirm the necessity of addressing central political topics such as violence against women, femicide, common good economy, sustainability and pacifism.

Bettina Wackernagel
Never stop questioning: (Re)discovering female protagonists in electronic music
Electronic music and sound production are thoroughly integrated into the art world and everyday life, yet electronic composers are pioneers who, apart from a few exceptions such as Karlheinz Stockhausen, Gottfried Michael König and Jean-Claude Risset, remain largely unknown. The same, but to an even greater degree, is true for the female composers of early electronic music, who appear only in the margins of music history and whose music still has barely entered our cultural memory. Yet female artists such as Bebe Barron, Else Marie Pade, Delia Derbyshire and Laurie Spiegel had successful careers in the field of early electronic music. These composers followed their own paths, away from the ideology prescribed by the studios. They significantly shaped the sound of electronic pop culture and influenced generations of musicians: bands such as Add N to (X), Sonic Boom, Aphex Twin and The Chemical Brothers have all employed references to Delia Derbyshire, and Laurie Spiegel’s Music Mouse software was widely used in pop music in the 1980s. The lecture will focus on early female electronic music, presenting artists like Laurie Spiegel, Suzanne Ciani, Beatriz Ferreyra and Daphne Oram among others, and reflect the initial objective and agenda for the Heroines of Sound Festival, established in Berlin in 2014.

Nina Dragičević
Seeking the history of women sound creators in the area of former Yugoslavia
The following text is not a search for women sound artists within what is existent, but an objection to the totality in which the world aims to present itself. Drawing from sonority as immanent to society, the text grabs absent fragments and places them in carefully structured social realities, thereby cutting into them. But sonorities are fragile, they become cuts through the unavoidable interpretation. Hélène Cixous declares: “The future must no longer be determined by the past.” From the standpoint of the subordinated groups, the past reveals itself as inadequate, even flawed and skewed, operationalized to preserve that very historical reality. Perhaps the question ‘Why were there no great women composers?’ is wrong. The radical lesbian and feminist perspective of Monique Wittig redefines it. Taking into account the political economies, she points to the complete absence of a certain identity and subject (in her case, lesbian) from history, in other words, from social existence. Instead of abandoning history altogether, she suggests invention as a constant beginning and potential. But absence always implies absence of sonority, and sonority is never truly absent. Only through manoeuvers of political economies that take advantage of the instability and interpretability of sonority does it seem to be absent. The question of the absence of sound artists, composers, and sound creators in the history of certain places is then a result of conformity to the dominant power structures. Writing the history of music is more than anything a matter of listening and, to be more precise, a question: Who is listening?

Andrea Szigetvári
Composing Politicality
On the turn of 18th and 19th century as music was freed from social and religious functions, the idea of “absolute music” has gained popularity and is still affecting our thoughts about music. Eduard Hanslick, for example, argued that music needed no connotation of extra-musical elements, for “music speaks not only by means of sounds, it speaks nothing but sound”. His opponents, the composers creating program music (Liszt, Smetana etc.) believed, that they should put into music only a poetic extra-musical content which is noble enough to be expressed as part of music. When we think about the possible extra-musical elements of today’s politics, we have to realize that they are not necessarily noble. Maybe that is one of the reasons why artistic music seems to be too fastidious to apply political subjects, leaving it rather to mass and popular genres. Electroacoustic music has an organic connection with extra-musical elements being very often its own source material. Both its new genres (e.g. soundscape) and musical tools (e.g. transcribing speech into melody) help to provide gateways between meanings, emotions and formal music structures. The subject of Beef Kohlrabi Cantata is the refugee crisis. The work written for soprano and electroacoustic sounds applies different electroacoustic music techniques to demonstrate how musical sound – created from extra-musical materials – can be interwoven with the bad and good things human beings are capable of.