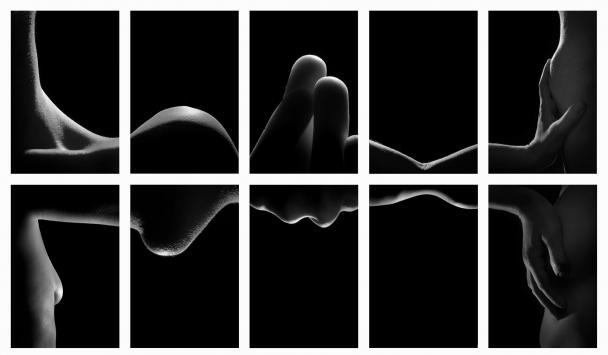 “Absolutely transparent sonority = the very definition of music.”
–R. Barthes, How to live together

Extensions of Pleasure (2019) is a sound installation in which Dragičević deals with the possibilities of sound being not only a way of expressing pleasure, but an active agent of pleasure. Two bodies in touch through their aural expression, perception and mediation of sound. Their sonic ontologies then leave the private, enter the public and involve you, the listener. From her explicit radical feminist perspective, the composer asks: Is pleasure really a romantic, sensual feeling, as it is conventionally understood? Or is it rather a point of disembodiment and destruction in its most constructive sense, as well as a carrier of unsayable consequences which derive precisely from its audibility? In that regard, is it not crucial to know that the composer of pleasure is a woman, or perhaps even two women?

The composition posits the audible of the erotic. The hearing process is circular, thereby defying traditional androcentric narratives. Extensions of Pleasure propose pleasure and its prolongation ad infinitum, both of which requires a letting go of one’s absolute individuality and propose listening to, through and within the Other. Even more, it shows the importance of the listener’s consciousness of their position in a patriarchal sonic hierarchy. It presents pleasure to the sphere of art, thus allowing for a deepened and broadened interpretation of particular sounds of that which is known but is unsociable. Pleasure is no longer only a feeling or an event, but a political statement; it is a sonic omnipresence of a doing which is not work, it is anti-work. Precisely that which the necrophilic, misogynistic, homophobic social structure seeks to silence and transform into docility and productivity.

The number of visitors is limited, reservation required at: pr@cityofwomen.org

To book a festival ticket (€ 15) write to: info@bunker.si