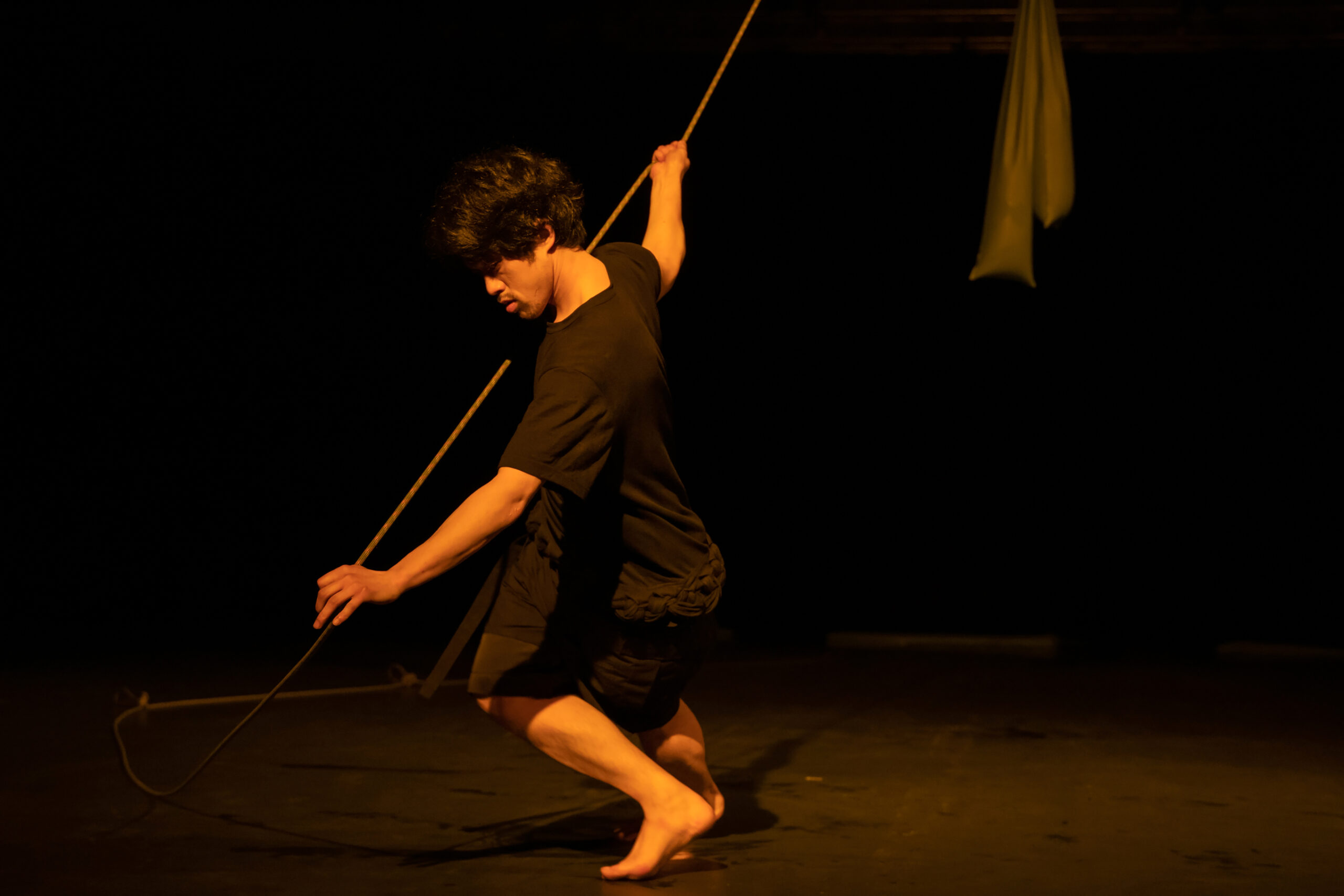 With his solo Gallop, the young Japanese artist Yuske Taninaka enters the international arena as a thorough researcher, an insightful analyst and a lucid creator. The artist subjects the biometric tools used by criminology and physiotherapy for the kinetic analysis of an individual’s movement to the introduction of body weight as a factor that renders these tools questionable. Behind the Gallop there is indeed a very personal story: the injury of Yuske’s brother, who will never be able to feel his body and its weight as he did before it. The altered physical and sensory factors of human locomotion and the problem of empathy turn Taninaka’s solo into a sequence of various kinetic actions that, even with the use of objects, bring the creator into sensual proximity to his brother’s physical state, despite his awareness of how unattainable this task is. The range of instruments, means and materials Taninaka uses on stage are not without their interferences with the history of contemporary art. The actions in which the performer is engaged can be very directly linked to the procedural experiments of the Japanese Gutai Art Association (Gutai Bijutsu Kyōkai, 1955–1972), one of the most important collectives of visual artists, Gutai, who transformed the landscape of contemporary painting and sculpture through the conversion of objects into performative actions and the use of objects and unusual materials, and who were a major influence on Yves Klein, Georges Mathieu, Allan Kaprow and Jackson Pollock, as well as collaborators with John Cage, Merce Cunningham and Robert Rauschenberg, among others. The Gutai Manifesto says: »In Gutai Art, the human spirit and matter shake hands with each other while keeping their distance.« The use of rope, the body and the ground is very directly related to the actions Kazuo Shiraga (1924–2008) used to create his paintings, but Taninaka’s aim in Gallop is not to modify or dematerialise the product of such artistic processes, but in the process as a means by which he could provide himself with the material conditions for empathy. In his solo, Taninaka confronts us in a very analytical way with a series of questions about artistic creation with the body: what are the limits in the production of the corporeal, or ultimately any real human experience, that the scientific or artistic instrumentality encounters in generating a bodily image.

Yuske Taninaka is a perfomer, dancer and choreographer, student of the Solo/Dance/Authorship MA programme at the Inter-University Centre for Dance (HZT) in Berlin.