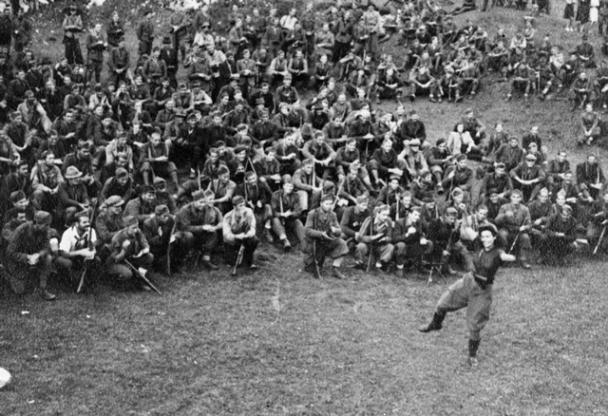 “When, as a dancer, I stood alone in the massive crowd of liberation fighters, aware that I shall be able to use my dance gift and weak body to express what had been uniting us, that I shall also be able to master the vast natural space, I felt strength in my feet, tramping the hard soil of the forest ground. In our case, it was not the so-called ‘ballet’ in the wider sense of the word, but more than that: it was a dance expression rooted in the domestic ground, human beings taking part in the very historic event of their own nation. It meant taking part in the liberation struggle of the people who know no despair, who know their power and their purpose. Dance invokes fighting, is victorious in it, then disbound into joy: due to fighting, due to efforts endured, due to strength, due to the very historic act.”
– Marta Paulin–Brina

The performance tackles the specific emancipatory moment of Slovenian contemporary dance during the WW2 period, showcasing dancer, choreographer and dance pedagogue Marta Paulin, with her Partisan name Brina, as the leading figure in this phenomenon. Before the war, she was a student of Meta Vidmar, who had founded a branch of Mary Wigman school in Ljubljana in 1927. She actively took part in the national liberation movement, was one of the founders of Partisan theatre operating within the XIVth division, and also organised improvisational dance acts for the fighters on Partisan outposts. In the inter-war period, she formed artistic and personal ties to Karel Destovnik–Kajuh. After the war, she was forced to give up active dance creation due to frostbite on her toes, so she remained active as a pedagogue and publicist.